The weather is not always good for testing things outside.
To be able to continue testing with the GPS widget, I made a GPS simulator / sensor based on a previous project.
I once developed a GPS Simulator app for android, this app can generate GPS NMEA senteces like a real GPS does.
It is possible to connect to the app via an HC-06 Bluetooth module.
The Bluetooth module then sends the same NMEA messages via the UART.
Such as position, speed, height, bearing and satellite fix.

What do you need:

Arduino Nano or any AtMega328 based arduino will do 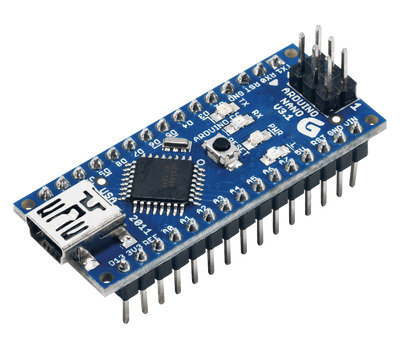 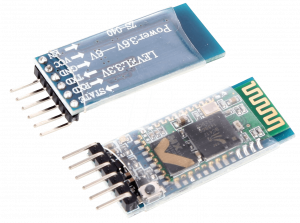 This is needed to program the bluetooth module and / or the Arduino Pro Mini, this can be any kind of USB to TTL adapter. 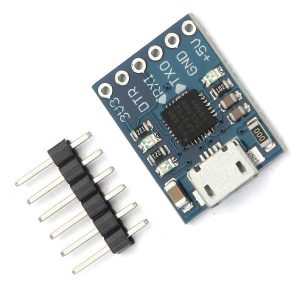 Servo cable for Smartport connection to the receiver. 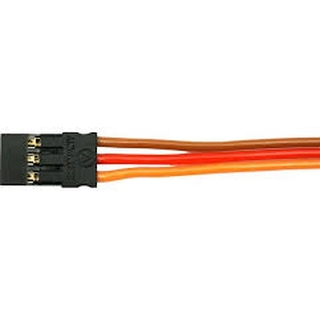 It is important to program the bluetooth module so that it works at 9600bd.

This is possible via a terminal program.
Fortunately, the HC-06 modules are already set to 9600bd by default, so you don’t have to do much here.
If you still want to change the name of the module, you will still have to program it via the USB-TTL PCB.

A good terminal program for programming is: 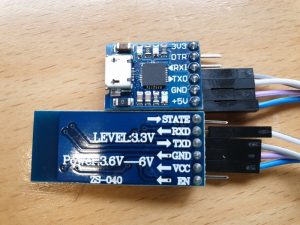 Connect the HC-06 module to the USB-TTL adapter as above in the picture.

Now start the Terminal program on the PC.

Select the correct assigned serial port (COM PORT) of the USB-TTL adapter (in this case COM6 ).
Set the baud rate to 9600bd.
Then click on “Connect / (Disconnect)”
Then enter the command “ AT ” to be sent in the white field at the bottom of the screen.
Then click on the ” Send ” button.
If the baud rate is set correctly, the answer ” OK ” should appear in the ” Receive ” window. 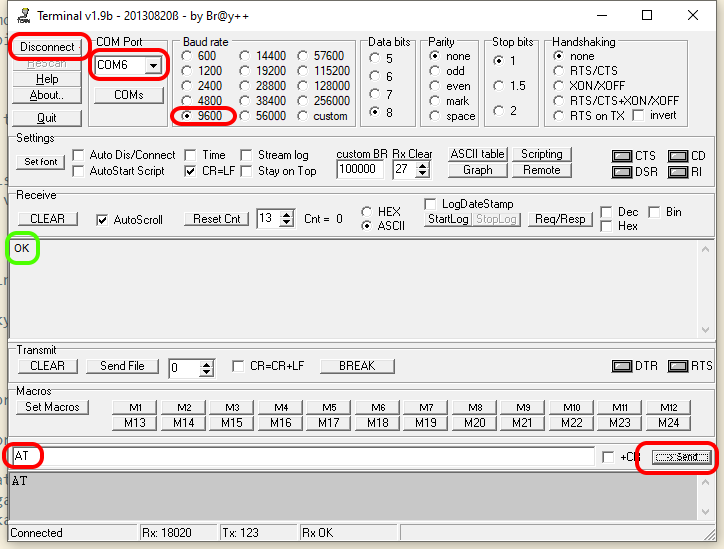 Once the answer has been received, it is now possible to set the required baud rate.
Enter the command ” AT + BAUD4 ” in the lower white field, and then press ” Send “. 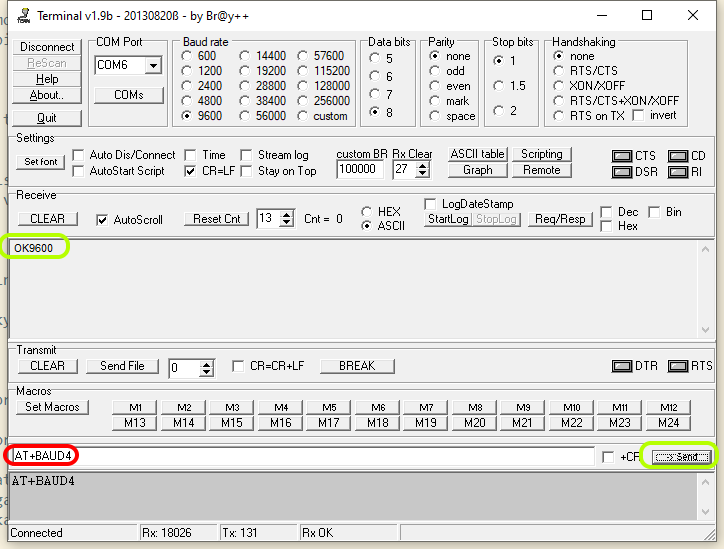 There is also a possibility to change the name of the HC-06 module.
This is the name that is displayed on a client device when searching for Bluetooth devices.

This can be done by entering the command ” AT+NAME “, immediately followed by a new name.
In this case we use the name ” GPSEMU “.

Enter the command ” AT+NAMEGPSEMU ” in the bottom white field and then click on ” Send “
The following must be returned as an answer in the ” Receive ” window: ” OKsetname “ 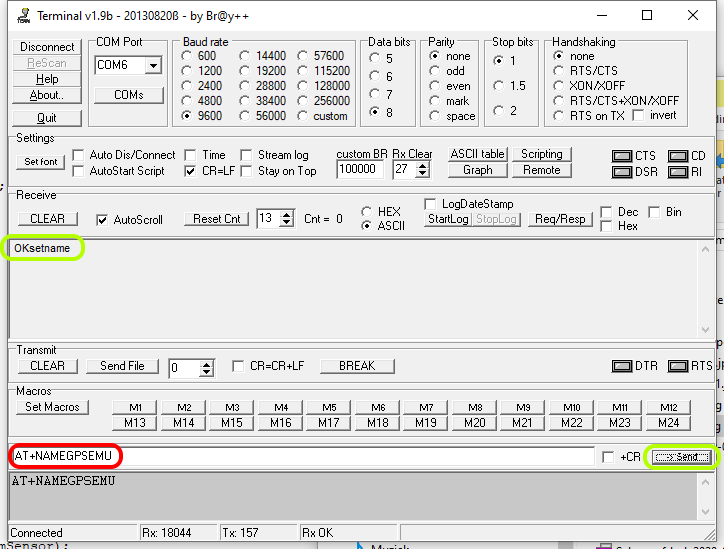 In this example I will use an Arduino Nano.
Download Arduino: Arduino IDE

Use the following Sketch file: FrskyGps.zip

Install Arduino, and then unpack FrskyGps.zip.
Start Arduino and open the project called: FrskyGps.ino
The first thing to do now is to install a library for the project.
At the top of the menu, click on ” Sketch -> Include Library -> Add .ZIP Library … “ 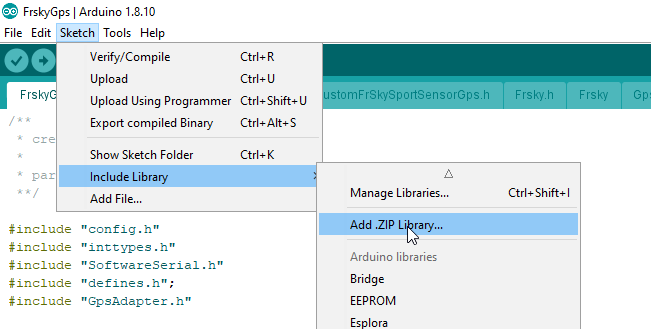 Then find the project folder, and open the “ libs ” folder.
Select the following zip file: ” FrSkySportTelemetry_20190824.zip ” and click on ” Open “
Arduino will now install the library. 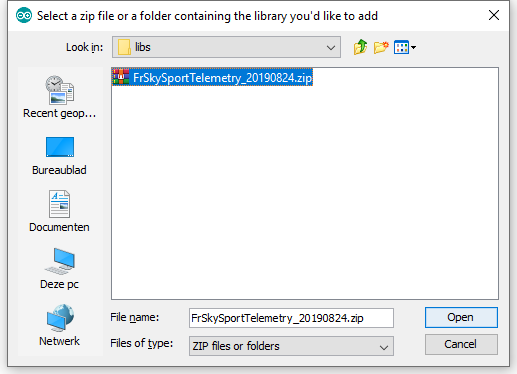 Then connect the Arduino to the PC via USB.
In this case an Arduino Nano. 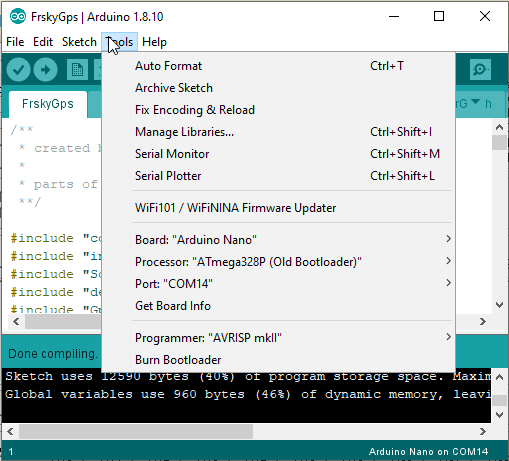 If everything is set up correctly we can flash the sketch in the arduino:

Click on the ” Upload ” icon to flash the sketch.
When the flashing is done, it says ” Done uploading ” at the bottom 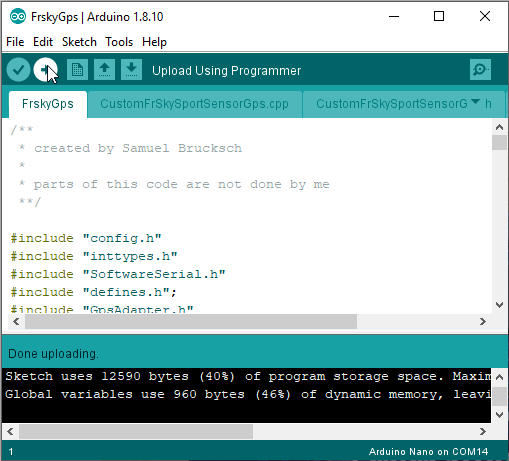 When the Arduino and the HC-06 module are programmed, it is time to assemble all the hardware.

First prepare the arduino by connecting the servo cable. 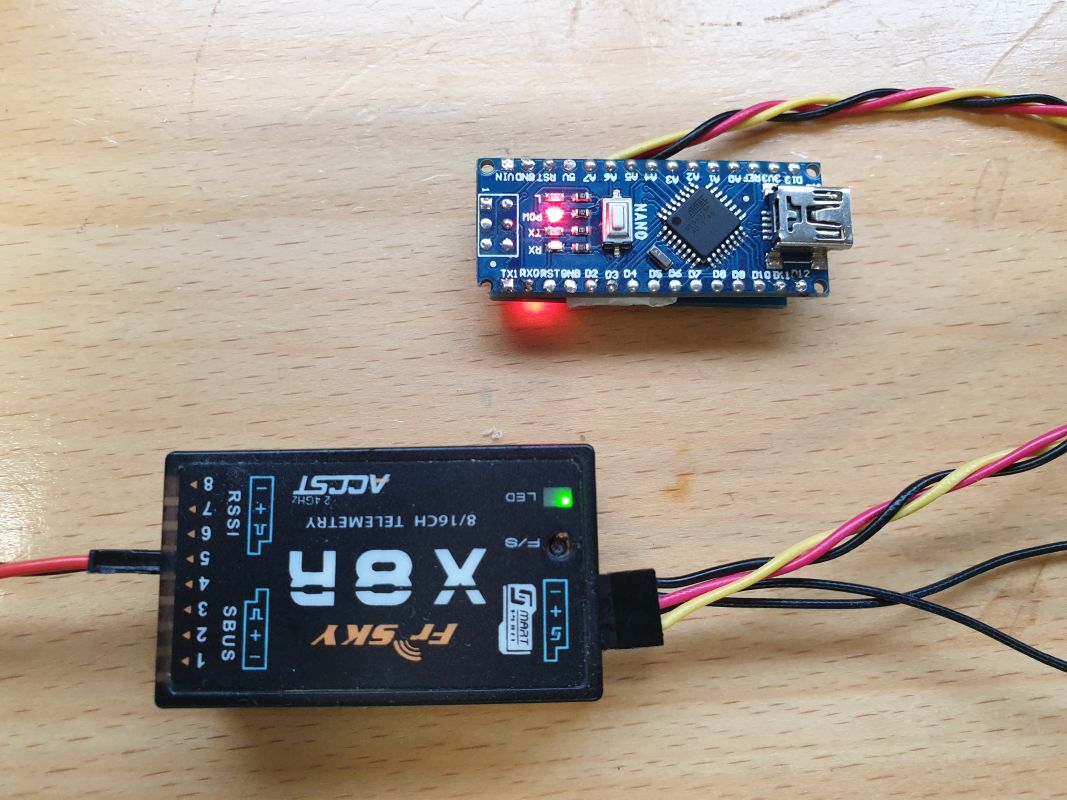 The soldering work is now done.

Now connect the Arduino via the servo cable to a receiver that is suitable for SmartPort.

To use the simulator we need an app for android.

Then install the app on your android device.

The first thing to do now is to pair the HC-06 module on the android device.

Go in your device to the settings for bluetooth and scan for bluetooth devices.
Then find the device with ” GPSEMU ” and connect.
The default password of the HC-06 module is ” 1234 “

Click on the connect button and select Bluetooth device “ GPSEMU ”
Once connected, the bottom of the window will show “ Connected succesfully! ” stand.

Now set some parameters to get you started.

Now go back to the start screen and click on “ START ”, the symbol in the middle of the screen will now flash blue, streaming of NMEA messages has now started.

Now go to the Telemetry menu in your channel.
And click on ” Discover new sensors “ 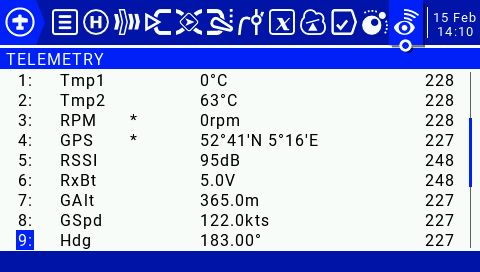